The depth maintenance task leads on from the work performed in the fault diagnosis lab, where it was the mindset taken that the components to be examined were potentially those identified and removed from service for further inspection on initial examination. In practice, due to the system I worked on being the engine, this process is unlikely to be so routine due to the extent of additional work required, but the process does hold true ordinarily for most other systems and would be conducted during routine overhaul.

As with all laboratories, steel toe-capped boots were required since even in the metrology lab the work-pieces being handled may be of a considerable size or mass posing a hazard if dropped from a workbench. Furthermore, examination tables are often of a dense material, such as granite or steel, due to their beneficial heat-sync properties, meaning they pose an additional hazard should the supporting structures on which the tops are placed fail. In addition, when conducting dye-penetrant non-destructive testing (NDT), face-masks, disposable gloves and coveralls were also worn to prevent inhalation and absorption of the vapourised dye.

In the Aircraft Structural Design module held this semester, we undertook a practical NDT  lab where we were trained through demonstration and practice how to perform dye-penetrant testing on appropriate aerospace structures. During that lab session, the importance of appropriate personal protective equipment (PPE) for such techniques was stressed and the manufacturer’s guidelines present on the canisters were read as is considered best practice by the Health & Safety Executive (HSE 2014: 1). During this lab, training was therefore not required in NDT techniques, however, the operation of the other equipment present was briefly explained and the available equipment deemed suited to the task being undertaken was then operated by ourselves as an opportunity to learn the techniques required.

As mentioned, the lab followed on from the previous laboratory conducted in this module where on this occasion we were presented with 3 compressor blades for damage tolerance and serviceability examination. Before conducting any work we were provided with insight into the equipment available, and its advantages and limitations, as well as briefed on simple metrology lab rules such as no uncovered drinks to be inside the room so as to avoid adversely affecting the ISO stipulated temperature of 20°C (BSI 2016). The following is a non-exhaustive, yet comprehensive, list of some of the equipment usually available to us: 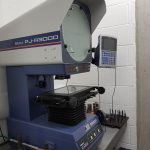 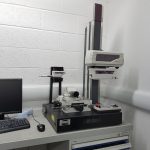 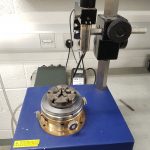 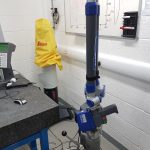 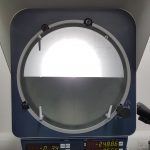 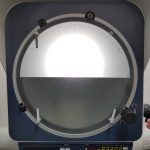 A small selection of the equipment available and example profile projector views with distances shown in millimetres from a datum.

Following the equipment explanation and instruction, we were asked to examine the compressor blades laid before us and plan the approaches to be made in determining whether they were serviceable. A brief discussion ensued where myself and my peers outlined again the various pieces of equipment at our disposal and their varying suitability to the task. Between us, it was decided that we should, in the order presented:

Unfortunately, due to the time limitations of an academic environment it was not possible to setup and use the CMM, a method understood to be one of the more used in industry, as batches of components can be inspected and compared to control sample data easily identifying those which are not serviceable. It was also highlighted to us that the university’s CMM had been removed from its initial location due to lack of prior planning which meant that overhead obstructions prevented its effective use. The new location on the ground floor of the building is not a controlled environment and as such regardless of calibration certification, the results produced cannot be deemed as accurate as intended.

Having conducted the work we found it difficult to determine serviceability as no specifications were provided. Assumptions were made that all 3 blades would likely be serviceable when taking into account the cost of scrapping and replacement as well as the extensive cost associated with manhours for the balancing work of the rotor assemblies. It was after drawing these conclusions we were reminded that from the previous lab we should deem any blades damaged in the bottom third as unserviceable, as a general rule-of-thumb. This is because the bottom third contains the highest stress concentrations found on the blade and any damage is therefore likely to initiate cracking and subsequent failure.

This sort of general ruling can be of great benefit in the industry as, had we of remembered such a point, the work conducted would have taken a third of the time as 2 blades would immediately be deemed scrap requiring no further inspection, saving valuable lab time. Conversely,  completing the process would allow us to log findings which could be used to build up a useful history to help in determining causal factors. Records can also be helpful in identifying poor practice in a different area of the business. As an example, the group examining a sealed brake unit found evidence of dye-penetrant testing which would automatically make the component unserviceable. These findings highlighted an error in procedure in earlier processes, which needed to be addressed and may have, if appropriate, invoked extra measures to be taken in case affected components passed unnoticed back into the serviceable equipment pool.

My final conclusion is that the lab was beneficial for improving my understanding of metrology, quality and product lifecycle maintenance. It would, in my opinion, have been of benefit to us to have been given the opportunity to use some of the other equipment, such as the CMM, to invoke an understanding of the operation timescales for setup and operation as well as output results for some of the industries most relevant equipment. It would also have been desirable to have been given tolerance data to undertake the tasking with to produce a feeling of purpose, akin to that of the industry. However, this is itself an example of resource allocation and trade-offs between essential and desirable opportunities. Supporting documentation takes time to compose and develop, and the key points to be taken away from this laboratory are covered in a suitable depth to warrant no further changes unless a suitable opportunity to generate these resources became apparent.

Health and Safety Executive (2014) Risk assessment: A brief guide to controlling risks in the workplace. [online] available from <http://www.hse.gov.uk/pubns/indg163.pdf> [20 March 2018]